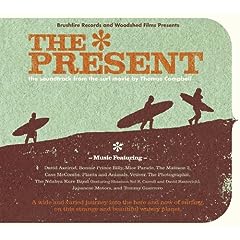 I feel like a schlub because I missed the screenings of Thomas Campbell’s new surf film The Present. And I’m making a desperate, last chance effort at redeeming myself by inviting all my fellow Southern California wave riders to San Clemente today at dusk to the Surfing Heritage Foundation to catch the screening of Dear & Yonder, the new surf film by Tiffany Campbell. Now, back to today’s music: The Mattson 2 are twin brothers Jared and Jonathan on guitar and drums respectively. This song in particular captures the spirit and tone of Campbell’s films, soulful surf jazz. The frantic back-to-school preparation for me and the kids is already leaving me nostalgic for this summer and the Mattson 2 along with Campbell’s films are sweet, Zen-like reminders that fall doesn’t arrive until September 22nd. Don’t rush it. Don’t rush it. If you like this track (note: the track that begins playing with the trailer below is not The Mattson 2, nor is it on the soundtrack, hmmm), I highly suggest you pick up the entire album which features other artists from Campbell’s boutique label Galaxia, plus Vetiver, David Axelrod, and Cass McCombs.