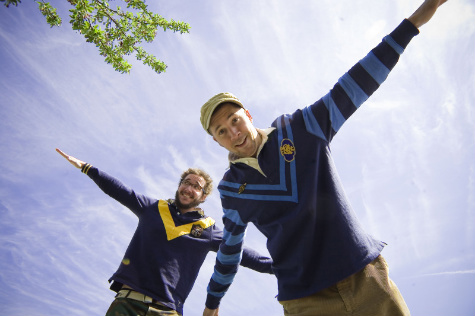 My problem with a lot of so-called “avant-hop” music, even some of that released on our beloved Anticon label, is that it’s just not funky enough. To quote that great skit from De La Soul Is Dead: “Maybe if you flipped it on 45, so I could dance to it…”

The Brooklyn duo known as Junk Science has been typecast as avant-hop thanks to intricate (and sometimes arrhythmic) production and autobiographical (and sometimes heavy) lyrics. What they should be known for is their ability to move a crowd, in both senses of the word. DJ Snafu is a sample connoisseur — dusting off everything from AM Gold to deep jazz to informercials — and puts a little “whazzat?” into every drum pattern he lays down. Baje One has an easy flow with lyrics that are at once approachable and hard to touch. And they know it, too.

In fact, MC Baje One regularly puzzles over his strictly underground status, as he does in the soulful shimmy “Do It Easy”: “Tryin’ to sell a couple records/At the club they come to check us/But dog, what kinda money do y’think I’m stackin’ y’all/Coachin’ JV high school basketball?” But he isn’t about change his style to goose his iTunes royalties: “Vitamins and nutrients, static in the bass/Plus I get extra points ’cause I ain’t rappin’ in your face.”

Baje One is taking matters into his own hands now, shedding their decidedly underground label, Embedded, for an imprint of his own making called Modern Shark. There’s a whole page of freeMP3bies to be had over at

That said, based on the clever punchlines of their latest single, “Millins”, even if Junk Science were to start making dollars we probably wouldn’t see a spike in Hennessey sales. But you better believe that JV team would get the finest throwback Nikes money can buy…