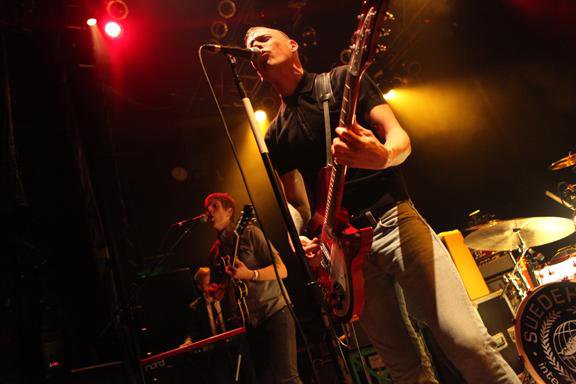 One of the off-shoots of British Mod music is a branch known as Northern Soul which took its cues from little known American soul bands. Now a little known band out of Costa Mesa, California is doing its darndest to revive the sound here on U.S. shores. That band, as you probably already guessed, is Suedehead and they have quite the pedigree. Singer and guitarist Davey Warsop used to sing with a British punk band called Beat Union. Chris Bradley (guitars) ran a small punk rock label called Unity Squad Records, and keyboardist Greg Kuehn did the same for punk rock legends T.S.O.L.

While Suedehead definitely has a punk rock energy and aesthetic about them, they’d be more fit at the head of dance floor than a mosh pit. They wear their affinity for Paul Weller and all things Jam on their sleeves, and that’s a good thing. Rocking out to their new EP, I’ve been asked several times if I was sure this isn’t Elvis Costello. And I’m sure, but it’s a good comparison if we went back in time and Costello was 27 again. The two treats we’re including from the band represent the second, darker half of their EP: the crowd favorite “Young & In Love,” and the video for the oh-so-danceable “Can’t Stop.” Tune in!