I’ve been captivated by Bill Callahan ever since I discovered him at my favorite record store. Callahan has been recording music for sometime now, since 1992 as Smog, a moniker he shed with his first self-titled album in 2007. His new album, Apocalypse, is his fifteenth. His voice is dark and smooth like a tub of margarine with bits of toast residue in it. It reminds me a bit of Chris Goss from Masters of Reality. Some musical parts in his newest album remind me of a few Mike Watt songs.

With only seven songs, the album appears to be short, but there are 40 minutes of tremendous song structures mixed with one of more original voices I have heard in a long time. This track, “Baby’s Breath”, starts out slowly, builds to a nice pace, then settles down into its original tempo. It repeats this pattern throughout. The emotional crux of the song hits as he exclaims, “Oh I’m a helpless man, so help me”, while his guitar cries out in pain. As of right now Apocalypse is the best album I have heard this year. I highly recommended it.

After a few days of obsessing over categorizing Netherfriendsâ€™ sound, I realized such efforts were unnecessary and that the six tracks on this EP were strong enough to stand alone. As vain as my attempts at classification may have been, I still have to try. Here goes: the majority of the Netherfriends EP is an exploration of pop possibilities. Itâ€™s an addictive mix of Animal Collectiveâ€™s meandering instrumentation and the Elephant Six Collectiveâ€™s tendencies to pay homage to â€˜60s era pop. “Mom Cop” leans towards the latter. However you decide to categorize them, listener beware: I ended up memorizing the lyrics to all six songs in a day. Netherfriends exposed the addictive side of my personality.

END_OF_DOCUMENT_TOKEN_TO_BE_REPLACED

The duoâ€™s album, Sometimes Water Kills People, can almost be considered as one extensive song, rather than nine separate tracks, thanks to its consistently moderate tempo and transitions that melt the endings into the beginnings of subsequent songs. Lyrics and vocals take a back seat to their mystifying guitar preludes, or thundering drum patterns. The six minutes of â€œCR68Câ€ is composed solely of stifled screeching guitar riffs with simultaneous plucking, and brief interludes of drumming.

If itâ€™s intricate music patterns or inspirational lyrics youâ€™re after, youâ€™re headed in the wrong direction. I admit it was difficult to digest Valleys’ synthesized additives and unorthodox style. But by track two, â€œSantiago,â€ I was hooked to their repetitive lyrics and mellow mood. Tie for first goes to â€œLe Sujet Est Delicatâ€ and â€œTan Linesâ€; the addicting oriental instrumentals coming in halfway through the former and the simple yet poetic lyrics of the latter skyrocketed their play count.

END_OF_DOCUMENT_TOKEN_TO_BE_REPLACED

Upon entering the nondescript disc into my player and pressing play, unexpected sounds of the early ’60s folk revival greeted me. Upcoming solo musicians and bands alike attempt this sound often, aiming for the blues-rock appeal of Dylan and the Byrds. Despite many failures at this seemingly futile endeavor, Secondstarâ€™s EP Teeth effortlessly masters it.

Liam Carey, the only permanent member of Secondstar, duplicates that mellow folksy-blues sound with the help of guest vocalists, lead banjo, and simple melodies. He says Teeth “is kind of a bridge from an older time of more tragic songs, to today, with more pop-influenced songs.” Although only five tracks long, Teeth boasts a mature, eerie quality, transcending many of his contemporaries. The EP opens with â€œRavensâ€ and its instantly infectious a capella harmonizing and hand-clapping intro. â€œKites and Arrowsâ€ blends melodic whistling with melancholic lyrics in a minor key. However, â€œPiecesâ€ maintains a slightly more upbeat tempo and employs additional banjo, lending it a dreamy, southern tone. Sink your teeth into “Ravens” and if you want more, a download of the entire EP is available here.

END_OF_DOCUMENT_TOKEN_TO_BE_REPLACED 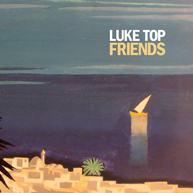 I am having a hard time filling in the genre field on iTunes for this Luke Top guy. In a word—curious. He plays the field a bit with bands, touring and recording with Cass Mccombs, Papercuts, and Foreign Born. I’m not going attempt a review of the Afro-Hebrew dance band Fool’s Gold he co-founded. Discover that on your own. The important part of the story? He’s quirky good. The cute-and-personable-brainiac-kid-in-math-class quirky good. Clearly being born in Tel Aviv to an Iraqi refugee and a Russian-born aviator transplanted to Southern California is a successful formula to inspire writing a light sigh of music.

END_OF_DOCUMENT_TOKEN_TO_BE_REPLACED

Since I missed the ’70s and blindly followed the “Proud to be Drug Free” crowd in the ’80s, Brian Olive is filling in the blanks for me. If I fell asleep to this record I’m sure I’d dream myself into New Orleans sometime in the ’70s, chemical high and all. The music is as colorful as the album cover, and sounds like a stack of beatnik, jazz, and psychedelic records melted into one soundtrack to a ’70s brown-hued television show. I think I’m gonna need a brownie.

END_OF_DOCUMENT_TOKEN_TO_BE_REPLACED

I havenâ€™t decided if William Fitzsimmons is a bastard with an irritating beard, or the undiscovered perfect boyfriend I missed sitting in the back of my most boring college class. Perhaps heâ€™s both, and maybe I dated his evil angelic twin. Joseph, the boy who knew heâ€™d never fight with his true love; the artist who was so sure heâ€™d leave his young family in the dark of night.

Fitzsimmons’ most recent album, â€œThe Sparrow and the Crowâ€ is about divorce. His divorce, but Iâ€™m certain any divorcee could glean some ah-ha from listening. Call it music to listen to once youâ€™ve accepted what has happened, comfortable with it or not. With a Masterâ€™s Degree in mental health you have to hope heâ€™s got solid ideas about the delicacy of marriage. The joy that aches.

If You Would Come Back Home is officially on repeat in my head, rarely interrupted for a week. Itâ€™s a nice sunshine melancholy soundtrack to the spectacularly mundane everyday stuff. He understands what took me so long to see, good writing is not about the fanciest words, itâ€™s about the perfect arrangement of the most simple words.

END_OF_DOCUMENT_TOKEN_TO_BE_REPLACED A few years ago I went to a political fundraiser where it was decided everyone would more likely hand over their pennies if all the begging was disguised as a hoe down. BBQ beef on rolls as big as your head, piles of potato salad and hay. Bales and bales of hay. Cowboy boots on hundreds of people with too much money whoâ€™d never even seen a cow in real life.

Not Waving But Dancing is not this type of hoe down. It is decidedly more hopeless. Like a drunken fest in a Romanian Gypsy camp. At this hoe down Peter the Great would show you his baby skeletons in his cabinet of curiosities; youâ€™d see less teeth, more fishnet, more velvet. With or without alcohol youâ€™d feel yourself moving slower.

END_OF_DOCUMENT_TOKEN_TO_BE_REPLACED

Good evening. I’m going to try very very hard not to make any “Pants” jokes here. O.k. â€” Let’s do this. He impressed Mr. Peanut Butter Wolf and now he’s impressing us with his neon-bathed, wheel-pitched funk. A sneak peak at the new album from James Pants, “Ka$h” draws a lot of comparison to Prince, Pharrell and the ’80s. More specifically, I would say it dates back when nerds *weren’t* cool, and Mr. Nelson was knocking the genres of the day on their sorry asses. There’s a DRM version out there now, but I’m holding out more. You could say I can’t wait for the rest of these Pants to drop. Ah, crap. I’m soooo sorry.

END_OF_DOCUMENT_TOKEN_TO_BE_REPLACED

Service Group songs start like any other indie pop song, then suddenly the ’70s era Top 40 guitars and choruses come roaring in, and its awesome, like when Datsun became Nissan. Service Group remind me of Boston the same way Ben Folds might remind you of Elton John, and thatâ€™s a good thing.