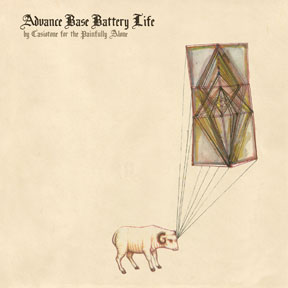 Here’s one that’s long overdue for an update and what do you know we’re just in time for Casiotone’s single collection due out this week. It’s called Advance Base Battery Life. The opening track, “Old Panda Days,” is classic CFTPA and highlights Owen Ashworth’s cunning command of couplets rhyming “boyfriends I shouldn’t have kept” with “stupid flatbeds we never swept.” You’ll have to listen to get the context. Not one to leave us hanging, Ashworth will quickly follow his singles and rarities collection with his fifth album, Vs. Children, of which “Optimist vs. The Silent Alarm” is part and proof that while Ashworth may be a one-man band, a one-trick pony he ain’t.

Note: Be sure to check out the SXSW Megamix from Tomlab, K Records, and Asthmatic Kitty. No medley nonsense here, just lots of full-length gems.

Casiotone for the Painfully Alone has been one of those monikers that kinda gives away the ending before you even press play — like Rage Against the Machine, or Insane Clown Posse. I say “has been” because now Owen Ashworth (who from some angles looks remarkably like 3hive’s Jon Armstrong, see for yourself) has joined forces with producer Jherek Bischoff to expand his sound beyond its lo-fi trappings. “Young Shields” is the lead-off single from the resulting album, Etiquette, which by all indications still speaks to the Painfully Alone, just with less Casiotone (and a lot more of everything else) than before. “Cold White Christmas” is also from the new joint… Where was this track when I was putting together my Christmas podcast? Oh well, this one defies seasonality. When isn’t a good time for some chilly melancholy?

END_OF_DOCUMENT_TOKEN_TO_BE_REPLACED

It’s been a little bleak here on Wednesdays, and I’ve been MIA for a couple of weeks — but hopefully you will all enjoy today’s musical selection and forgive the midweek blackout of late. The Blow, consisting of Khaela Maricich & Jona Bechtolt from Portland, OR, have been carrying me through a busy time. The music is rife with slick modern beats, but there is a super pop, super earnest candy center. Throughout the album there are many, many references to how hard it is for girls and boys to come together and I admit (with a blush and an eyeroll) that when Khaela sings “really you just injured my pride” I had a moment where I was like “um, did I write this song???” As usual, file under: better late than never.

Sam’s original post: 01/10/05
I was going to wait for Valentine’s Day to post this, but couldn’t because I’ve been waiting long enough as it is. The Blow is one unassuming Khaela Maricich whose catalog of come-ons is sultry, clever, and disarming enough to lure even the most reluctant players to bed. When I say players, I don’t mean Fabolous or Jermaine Dupri. I mean the mysterious outsiders, the John Cusacks of the world. To some such player, Khaela sings, “I’d love to make you nervous/I’d love to make you sweat/I’d love to make you breakfast the morning after…” How you gonna say no to that? And if you do, would you be pal and pass her number along?

END_OF_DOCUMENT_TOKEN_TO_BE_REPLACED

You can call me a philistine, but the term â€œexperimentalâ€ scares me a little bit. Maybe yâ€™all agree with me? More often than I am comfortable with â€œexperimentalâ€ becomes some sort of catch-all term forâ€¦ well, for lots of things that wouldnâ€™t be nice to say here in this my first post of the new year. Alas, Canadian violinist Owen Pallet AKA Final Fantasy, who notably arranged the strings for Arcade Fireâ€™s â€œFuneralâ€ amongst other past musical endeavors, is unequivocally â€œexperimentingâ€ with his solo musical offerings and I canâ€™t find a single unkind word for him, nor would I want to. These songs are non-linear, funny, offbeat, complex and unexpectedly beautiful. Pallet maintains all of the musicality of his classical training while successfully maintaining a lovely pop sensibility. Now don’t get me wrong, there are absolutely traces of some of the oft-loathed hallmarks of â€œthe independent sensibilityâ€ (i.e. utilizing the word poo in the album title, naming oneself after something random like a video game, writing an album that is apparently â€œan eight-song cycle about the eight schools of magic in Dungeons & Dragons,â€ etc.) but heâ€™s smart. Really, really smart. So Pallet gets away with all his geeky wit and irony like a bandit. All things said, Iâ€™m really shy about dropping the L-word, folks, but let me say here, loud and proud: I love this. Donâ€™t dig it? Then just listen one more time, for me, and then decide. Okay?

END_OF_DOCUMENT_TOKEN_TO_BE_REPLACED

Continuing with our goof-hop weekend here at the Hive, ladies and gentlemen…introducing Ninja High School. Self-proclaimed “positive hardcore dance rap,” Toronto-based NHS go out of their way to avoid hip-hop clichÃ©s pulling from post-structuralist theory and art criticism. Sure it sounds heady, but Ninja High School’s got mad skillz at breaking down grandiose ideas into catchy, party-perfect, sing-along choruses. It’s up to you whether or not you tap your local lit department for your next Barthes party.

END_OF_DOCUMENT_TOKEN_TO_BE_REPLACED

Some songs inspire me to write music. Mantler’s like that. Simple melodies I can get my head around. I imagine myself sitting down at the piano and fiddling around with a few keys until a riff comes to life. If only I could pull myself away from this QWERTY keyboard for two minutes…and I’d have to find a drummer (ain’t got a lick of rhythm).